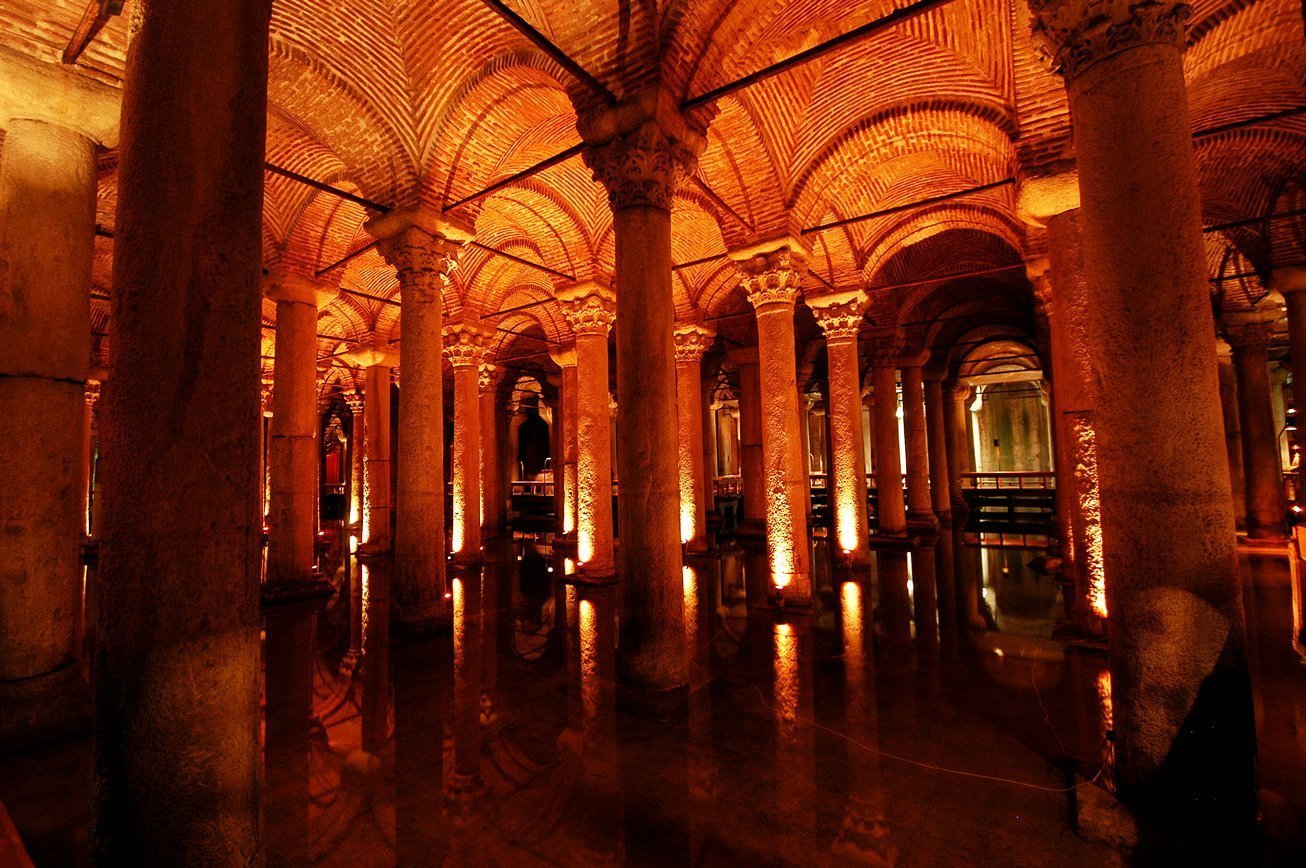 Basilica Cistern is one of the most important historical monuments of Istanbul. This large underground water reservoir, built for the Byzantine Emperor (527-565) Justinianus I, is known as the "Basilica Cistern" among the people because of its underground marble columns. It is 140 m long and 70 m wide. Sarnıç, which can be reached by a 52-step ladder, has 336 columns, each 9 meters high. The columns, built at 4.80 m intervals, consist of 12 rows, each row contains 28 columns. Covering a total area of ​​9,800 square meters, the cistern has an estimated water storage capacity of 100,000 tons.

Two Medusa heads used as support under two columns in the cistern are an important work of art from the Roman period. Medusa is one of the three Gorgonas that are female monsters in the underworld in Greek mythology. Medusa, one of the three sisters, has the power to gorgonize the carers. Accordingly, Gorgone paintings and sculptures were used to protect large buildings and private spaces at that time. And putting the medusa head in the cistern was for protection. According to another rumor, Medusa was a girl who boasted for her black eyes, long hair, and beautiful body. He loved Zeus' son, Perseus. Athena was also in love with Perseus, and this envied Medusa. That's why Athena turned the medusa's feathers into snakes. Medusa's head was engraved on the stems of swords in Byzantium and applied upside down to the commune supports.

During the Byzantine period, the Basilica Cistern was used to meet the water needs and needs of the large palace covering a large area where the emperor lived and other residents in the region. It was used for a while after the conquest of Istanbul in 1453 and water was supplied to Topkapi Palace, where the sultans resided. However, the Ottomans preferred running water instead of stagnant water and established their own water facilities in the city. The investigation of the Byzantine ruins and the introduction of the world took place in 1544-1550.

The cistern has undergone various repairs since its establishment. The first repair of the cistern, which was repaired twice during the Ottoman Empire Period, was built by Architect Kayseri Mehmet Ağa during the reign of Ahmet 3. (1723). The second repair was carried out during the reign of Sultan Abdulhamid II (1876-1909). During the Republic Period, the cistern was cleaned by the Istanbul Municipality in 1987 and was opened to visitors by making a tour platform. In May 1994, it went through a major cleaning and maintenance.

We would like to be happy to see you in Istanbul with us. If you contact to us we will glad to help you for Istanbul city tours with our local expert guide.