Hagia Sophia means "Holly Wisdom" in Greek languance, this was an Orthodox church cathedral dedicated to holly wisdom, not to a Saint Sophia as some people wrongly call it today. Turkish people call it Aya Sofya. It is a former Byzantine church and former Ottoman mosque. Now located in Sultanahmet neighborhood being one of the most important museums of Istanbul considered as a World Heritage by UNESCO. It is one of the greatest surviving examples of Byzantine architecture.

The first church of Hagia Sophia was built on the same site in the 4th century by Constantine the Great and renovated by his son Constantinus II in 360 AD. It was a small wooden church in Constantinople.

Hagia Sophia, one of the historical architectural wonders that still remains standing today, has an important place in the art world with its architecture, grandness, size and functionality. 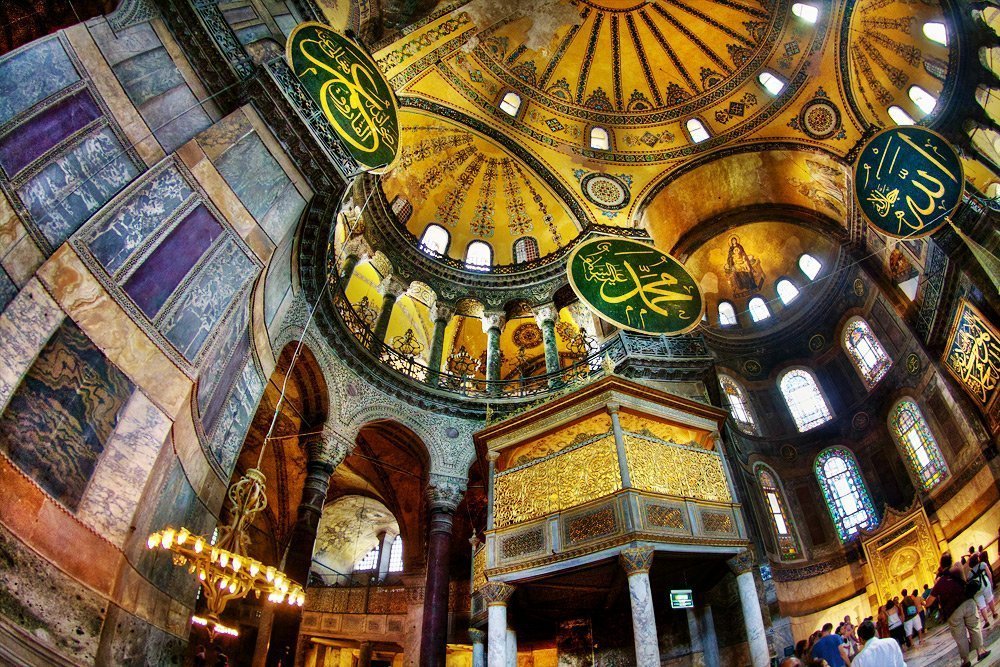 Following the capture of Constantinople by the Ottoman Turks in On May 29th, 1453, the Ottomans conquered Constantinople and Sultan Mehmet II ordered to convert the church into a mosque. Because he admired the art, the sultan didn't want these great mosaics to be destroyed so he plastered them over and the Ottomans made their own floral designs or geometrical patterns, as well as Coranic calligraphy on top of the plaster. In order to use it as a mosque, Mihrab and Minbar were added inside, a fountain for the ablution was placed in the courtyard, and minarets were built in different periods in the outer corners of the building., and the subsequent pillaging that ensued. As a mosque, it was considered as one of the holiest Islamic temples of the world. It also served as Istanbul’s principal mosque for nearly 500 years and was used as a model for many others including the Sultan Ahmet Mosque, the Suleymaniye Mosque and the Rustem Pasha Mosque.

Under the order of Mustafa Kemal Atatürk and the Council of Ministers the Hagia Sophia Turkey opened as a museum in 1935. Today, it is visited by nearly 10,000 people per day and the Turkish Ministry of Tourism declared that it received more than 4 million visitors in 2019. The Hagia Sophia ticket price is about 15 euro, but be warned unless you buy your ticket in advance or go travel agency for guided tour, there are often very long queues.

We are waiting and we hope to see you soon in Istanbul. If you contact us, we will be happy to assist you with our local expert guide for Hagia Sophia tour, Istanbul city tours and Istanbul Bosphorus tours.